There’s More to Video Production than Turning On a Camera 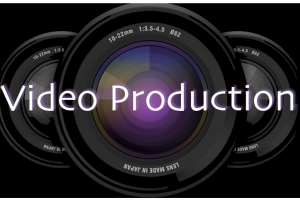 Thanks to the high definition video cameras that come already installed on most smartphones, tablets, and other portable devices, creating high-quality videos is something anybody can do.

But there is a big difference between making videos and producing videos.

What Does a Video Producer Do?

Point your smartphone at something, push the “Record” button, and you have created a video. But is it a video people would want to watch? In most cases, unless you happen to be at a once-in-a-lifetime moment such as when a tornado hits or somebody hits a game-winning home run, the answer is probably not.

Making videos people want to actually watch requires a lot of pre- and post-production work. This might include pre-production such as developing an idea, crafting a script, and casting charismatic people to be in your video.

It also may include post-production such as editing different shots together so that they make sense and tell a story, adding a voice-over track or fixing the sound so that people can hear what is being said, adding special effects or other video tricks.

Whether you are creating a feature-length film, developing a television pilot, making a training video, or simply chronicling a graduation or wedding, the video you craft needs to make sense to the viewers. Pointing a camera at something usually isn’t enough.

This is the lesson most amateur video creators have yet to learn. When somebody asks you to watch their video, you want to be sure it is something that is worth watching. Or at least watchable.

Similarly, when you need to create a video to serve a specific purpose — such as to promote a product or service, teach people how to do something, or capture a moment for posterity — it’s important that the videographer knows what they are doing.