Corporate Communications Is Easier with Video 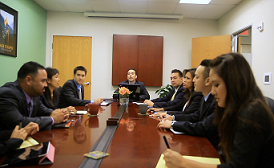 If you work for a corporation, you probably receive a lot of emails every day. Some undoubtedly contain important information for your business. But most likely the majority of the emails you receive are marginal at best, and a waste of time at worst. Be honest: How many do you actually read?

While a lot of businesses still use email to communicate with employees, vendors, clients, and others, the rest of the world has moved on. Email is actually an archaic, 20th Century communications platform that is slowly becoming obsolete.

Some recent surveys indicate that many young people, including new college graduates, don’t even have a personal email account. Instead, the next generation of corporate leaders communicate through texts, social media, apps, and — most importantly — video.

Video is quickly surpassing email as the primary way people communicate online. Today’s business people have access to video on their smartphones, tablets, laptops, PCs, and other devices.

So companies that communicate embrace video as their primary means of communication are in a better position to dominate their markets than businesses who still rely on email to send out memorandums, briefings, and other documents that people aren’t reading.

In today’s fast-paced business world, many people who won’t stop and read an email will watch a video on their devices, especially if it is professionally produced and contains important information they can use.

Videos connect with people on an emotional level, combining images, words, music, and tone to communicate directly with employees, shareholders, clients, and others. It’s not the future of corporate communications, it’s already here.

So if you want to make genuine connections with real people, stop sending out emails. Instead, let Hawaii Video Pro partner with you to produce informative, effective videos that can expand the scope of your business.