Got an Idea for a Movie? Pitch It! 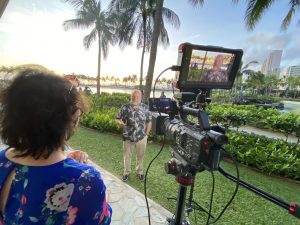 If you have a great idea for a movie or TV show but aren’t sure what to do with it, here’s a suggestion: Create a professionally produced video of yourself pitching the idea to a Hollywood studio. Then send it around “The Town”.

You never know. Stranger things have happened. It might just get picked up. And you could be a creator of tomorrow’s next breakout entertainment property.

So, in order to give your idea the best possible chance of getting “green-lit”, it needs to be fully formed. That means a plot, characters, an emotional arc, some sort of action, and an ending. The worst thing you can do is to send out a half-baked idea that is only going to damage your reputation.

If you can come up with a great idea that has a beginning, middle, and end, some memorable characters, and maybe even some great sample lines of dialogue, you have a much better chance of getting noticed in the entertainment industry. You don’t even need to have a fully-developed screenplay or TV pilot script. That usually comes later.

And if your pitch is good enough, even if a studio executive doesn’t choose to move forward with that project they may ask if you have any other ideas. And that means you’ve already got one foot in the door.

The main thing is to look and act professionally. A pitch shot on your smartphone isn’t going to be watched by anybody that matters. But when you have a professionally produced video that makes you look like you’ve done this before and your idea is a good one, the chances of getting the attention of Hollywood decision-makers are much higher.

Hawaii Video Pro can help you package your pitch so that it’s ready to be presented to the gatekeepers of the entertainment industry. The rest is up to you.